[NOTE – This post covers NLP & Sentiment Analysis at a very high level and is not intended to be an ‘all-inclusive’ deep dive in the subject. There are many nuances and details that will not be discussed in this post. Subsequent posts will dive into additional details]

While modern computers can easily outperform humans in many areas, natural language processing is one area which still poses significant challenges to even the most advanced computer systems. For instance, while people are able to read Twitter posts about a given company to infer a general sentiment about the company’s performance, this type of interpretation is challenging to computers for a multitude of reasons:

For reasons, such as those shown above, NLP can typically be automated quite well at a “shallow” level but typically needs manual assistance for “deep” understanding. More specifically automation of Part of Speech tagging, can be very accurate. (e.g. >90%) Other activities, such as full-sentence semantic analysis, are nearly impossible to accurately achieve in a fully automated fashion.

One area where NLP can, and is, successfully leveraged is sentiment analysis. In this specific use case of NLP, text/audio/visual data is fed into an analysis engine to determine whether positive / negative / neutral sentiment exists for a product/service/brand/etc. While companies would historically employ directed surveys to gather this type of information, this is relatively manual, occurs infrequently, and incurs expense. As sites like Twitter / Facebook / LinkedIn provide continuous real-time streams of information, using NLP against these sources can yield relevant sentiment based information in a far more useful way.

In the screenshot shown above, Twitter posts have been extracted via their API for analysis on the company Peloton. A few relevant comments have been highlighted to indicate posts that might indicate positive and negative sentiment. While it is easy for people to differentiate the positive / negative posts, how do we accomplish automated analysis via NLP?

While there are numerous ways to accomplish this task, this post will provide a basic example which leverages the Natural Language Tool Kit (NLTK) and Python to perform the analysis.

The process will consist of the following key steps:

As previously discussed, it is very difficult for a computer to perform semantic analysis of natural language. One method of assisting the computer in performing this task is to provide training data which will provide hints as to what should apply to each of our classification “buckets”. With this information, the NLP classifier can make categorization decisions based on probability. In this example, we will leverage NLTK’s Naïve Bayes classifier to perform the probabilistic classifications.

As we will primarily be focused on Positive / Negative / Neutral sentiment, we need to provide three different training sets. Samples are shown below.

This step will be heavily dependent on what you are analyzing and how you will process it. In our example, we are working with data source from Twitter (via API) and we will be loading it into the NLTK framework via Python. As the training data was also based on Twitter posts, we used the same process to acquire the initial data for the training data sets.

Acquiring Twitter feed data is relatively straight forward in Python courtesy of the Tweepy library. You will need to register with Twitter to receive a consumer key and access token. Additionally, you may want to configure other settings, such as how many posts to read per query, maximum number of posts, and how far back to retrieve.

Once you have the correct information, you can query Twitter data with a few calls:

As NLTK can easily handle Comma Separated Value (CSV) files, the Twitter output is written out to file in this format. While Twitter returns the User ID, as well as other information related to the post, we only write the contents of the post in this example.

Once you have a process for acquiring the training / analysis data, you will need to “clean” the data.

As you can imagine, if you start with “garbage” data, your classification program will not be very accurate. (e.g. Garbage In = Garbage Out) To minimize the impact of poor quality information, there are a variety of steps that we can take to clean up the training & analysis data:

Once the data has been cleansed, training categorization can occur.

As referenced previously, the sentiment analysis is performed by providing the NLP process training data for each of the desired categories. After stripping away the stop words and other unnecessary information, each training data set should contain word / word groupings which are distinct enough from each other that the categorization algorithm (Naïve Bayes) will be able to best match each data row to one of the desired categories.

In the example provided, the process is essentially implementing a unigram based “bag of words” approach where each training data set is boiled down into an array of key words which represent each category. As there are many details to this process, I will not dive into a deeper explanation in this post; however, the general idea is that we will use the “bag of words” to calculate probabilities to fit the incoming analysis data.

The unigram “bag of words” approach described above can run into issues, especially when the same word may be used in different contexts in different training data sets. Consider the following examples:

As the unigram (one) word approach looks at words individually, this approach will not be able to accurately differentiate the positive/negative use of “high”. (There are further approaches to refine the process, but we’ll save that for another post!)

IMPORTANT – The output of this process must be reviewed to ensure that the model works as expected. It is highly likely that many iterations of tweaking training data / algorithm tuning parameters will be required to improve the accuracy of your process.

Once the training data has been processed and the estimated accuracy is acceptable, you can use iterate through the analysis data to create your sentiment analysis. In our example, we step through each Twitter post and attempt to determine if the post was Positive / Negative / Neutral. Depending on the classification of the post, the corresponding counter is incremented. After all posts have been processed, the category with the highest total is our sentiment indicator.

Once all of the pieces are in-place, you can run your process and review the output to validate your model. To simplify the testing, I created a fictitious phrase [FnuaFlaHorgenn] and created a handful of Twitter posts referencing it. I then ran the program to verify that it correctly classified the Twitter post(s) 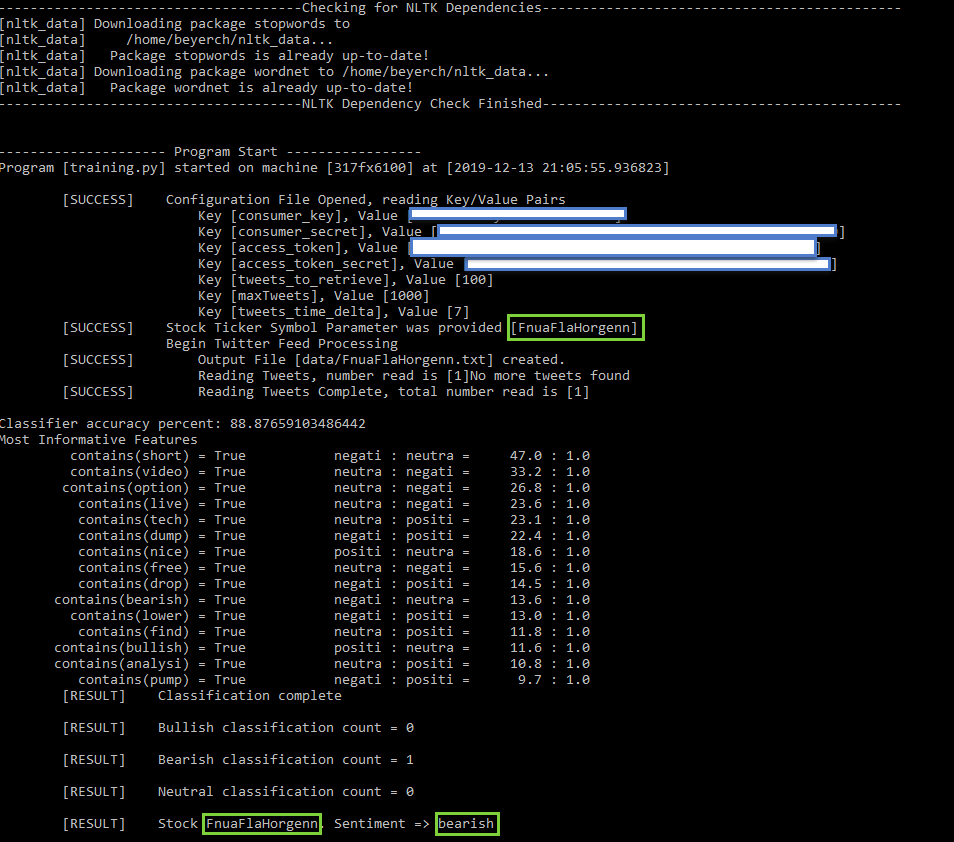 While NLP is not perfect and has limits, there are a wide variety of use cases where it can be applied with success. The availability of frameworks, such as NLTK, make implementation relatively easy; however, great care must be taken to ensure that you get meaningful results.